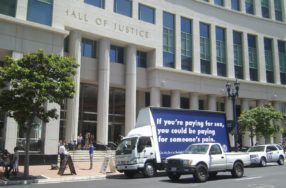 According to the FBI, San Diego is a “High Intensity Child Prostitution Area,” in which the average age for entry into sex trafficking is a mere 16 years old. The Voices and Faces Project exists to raise awareness of facts like this, debunk myths and reveal the truth about sexual exploitation and human trafficking around San Diego.

In a recent campaign called “The Ugly Truth,” The Voices and Faces Project has displayed jarring but truthful messages around San Diego, such as, “If you’re paying for sex, you could be paying for someone’s pain.” The Voices and Faces Project hopes that the blatant facts and debunked myths will raise awareness of how widespread the problem is in San Diego.

We sent two of our mobile billboard units to San Diego to help the Voices and Faces Project spread “The Ugly Truth” and get people around the area (including Comic-Con audiences) to begin thinking differently about human trafficking, its conditions and the girls, boys and women it affects. 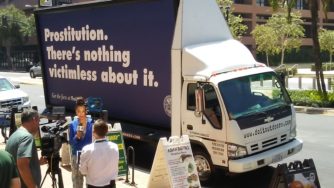 We believe in the power of our mobile billboards for social justice marketing, so we decided to get involved. We donated two mobile billboard units, including creatives and production. The mobile billboards were executed at the kickoff of “The Ugly Truth” campaign and press conference on June 27th. They ran throughout the summer and also targeted Comic-Con audiences in downtown San Diego on July 25th.

Anne K. Ream, founder and creative director at The Voices and Faces Project, says of working with our team, “This partnership is an example of how media and creative can work together to change minds and hearts around social justice issues. Together, we really have succeeded in marketing a movement that will improve the lives of women and girls in the US, and across the globe.”

There will be a new national trafficking coalition launching this fall, which will include the expansion of “The Ugly Truth” campaign to other major markets.

Ream hopes that once the public is more aware of the magnitude of these problems, they will be supportive of trying to effect change and end human trafficking and prostitution.

If you want to spread your message with a mobile billboard, contact us.