Digital OOH goes beyond LCD screens; for us, it’s about integration 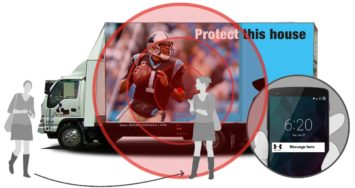 Over the last few years, we’ve been experiencing an evolution of the out-of-home advertising industry. The intersection between digital and OOH soon became known as Digital OOH, or DOOH. While everyone else in the industry was putting programmable LCD screens on their media, we took a different journey: the path less traveled.

“We want to provide greater value to our advertisers than just adding a flashy screen,” says Regis Maher, President and Co-founder. “What’s digital?” he asks, as he holds up his smartphone. “It’s about integrating everything we do in the physical world to what consumers do in the virtual one. We create experiences that transcend both worlds…and end up on the device no one leaves home without.”

Why didn’t we jump on the digital screen bandwagon? That’s easy. We knew it wasn’t the best experience for our advertisers or their consumers.

Don’t misunderstand. When a digital screen makes sense for an advertiser’s objective, such as an interactive experience, we have the means to operate a mobile billboard campaign with a digital screen. It just hasn’t been our core focus as we ‘go digital’ in other ways.

Instead of putting a screen on the side of our entire fleet, we’ve decided to engage consumers digitally.

“Beacons allow an advertiser to deliver a 1-2 punch directly along the path to purchase,” explains Maher. “When a consumer is in close proximity to a mobile billboard, they’ll be sent a push notification to their smartphone. This wakes up the phone and alerts the user. It’s disruptive but relevant.”

Advertisers who deliver meaningful, interactive digital experiences based on a consumer’s location achieve powerful brand-to-consumer connections. Providing useful or rewarding content can personalize the user experience that is so key in any digital OOH campaign. Paired with a larger-than-life mobile billboard advertisement, this becomes an ‘aha’ moment for consumers.

Our media formats have always been terrific on a micro-geographic scale. Hyper-local targeting has been our game. For advertisers looking to truly saturate a market with both digital and out-of-home, we can now be the one partner who does both.