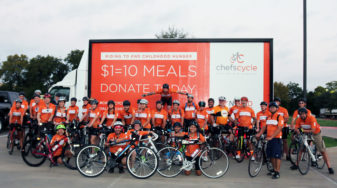 One of the charities we, along with many of our restaurant clients, proudly support is No Kid Hungry. No one is working harder to end childhood hunger in the U.S.

“One in five children struggles with hunger in America, but No Kid Hungry is committed to developing innovative solutions where children live, learn and play,” explains our VP National Accounts Shari Maher. “At do it outdoors media, we are proud to get involved or give back when we can. This nonprofit in particular has a special place in my heart.”

Last year, we helped No Kid Hungry take over Times Square. This year, we tagged along during one of their existing events.

Nearly 50 chefs and restaurant industry professionals participated in the Dallas Chefs Cycle event to raise awareness and funds for No Kid Hungry. Riding from Garland to Winnsboro, TX, on Tuesday, October 18, the group traveled 107 miles in one day.

“During the Dallas Chefs Cycle event, we provided a No Kid Hungry mobile billboard to lead the way and raise awareness for No Kid Hungry to observers,” explains Maher.

The mobile billboard’s 10′ X 22′ creative on each side drove a a fundraising message: $1 = 10 Meals. As people saw the crowd of cyclists, all in orange, rolling along their route, the mobile billboard was a clear descriptor of what was happening. We hope it also persuaded them to make a donation.

“Seeing that big splash of orange in the distance – marking each upcoming rest stop – was the thing that kept us going!” says Diana Hovey, senior director of Dine Out For No Kid Hungry and one of the cyclists.

The mobile billboard, which was provided at no cost to the nonprofit, also provided a great backdrop for participant photos! 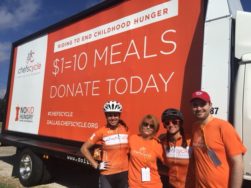 “We applaud No Kid Hungry and the programs they’re providing in schools and communities across America,” says Maher. “We’re pleased to drive their messaging with our media formats.”

Maher also went on to explain that the charity was looking into exciting online fundraising platforms such as GoFundMe to raise awareness of future events. Above all, finding new ways to generate funds for this worthy cause can ensure that the charity goes on to help even more children in need.

For more information on how our media formats can drive your message, please contact us.