Who doesn’t like to save $10 on their grocery bill?

When Mariano’s wanted to drive traffic to its New City location in Chicago, it teamed up with us to launch a unique out-of-home campaign that featured SMS advertising. In partnership with Blue Bite, our turnkey approach enabled consumers to text the keyword GROCERY to shortcode 99000. They received a digital coupon that could be saved directly into their phone’s gallery for redemption the next time they needed groceries.

But first, consumers needed to see the call-to-action to know the text-to-get offer was available.

So why not use a larger-than-life message that moves around busy traffic areas at eye-level: a mobile billboard!?! 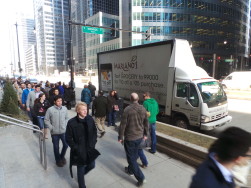 Then, to boost the excitement for Mariano’s even more, we executed a brand ambassador team for each of the weekends during the campaign. This four-person team and their event manager hit up busy locations within a half-mile radius of the New City store. These spots included the Clybourn train station, a local strip mall and competitive targeting at another nearby grocery store.

“On a very snowy, very windy, and very cold Valentine’s Day, the team brought enthusiasm to the street to get consumers excited about saving money on a future purchase,” explains the senior national field manager. “Much of our conversations with consumers were generated by the spirit of love in the air. As we saw individuals walk down the street with their partner, we suggested that they stop in a Mariano’s and buy a Valentine’s Day cupcake for their significant other.”

And some consumers even stopped back to report that they had taken the suggestion!

Overall, it was the combination of a mobile billboard, brand ambassador team and compelling SMS offer that resulted in a successful campaign. For the full analysis, see the Mariano’s case study.